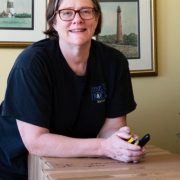 One of the things we hear from new residents the most is that they wish they would have started downsizing and planning for their move sooner. Moving out of a home you’ve lived in for many years can be stressful enough – why not get a head start on tasks like cleaning out the attic and deciding which furniture to keep?

Jennie Alwood, Founder and Vice President of Here to Home is ready to help you or your loved one prepare for the move you’ve been reluctant to put into motion. We sat down with Jennie to take a closer look into her expertise and equip you with the knowledge you need to make moving into a senior living community as stress-free as possible.

Tell us a little bit about a day in your life.

Day to day, I do whatever it takes to move someone from one place to another with ease. That typically includes tasks like floorplanning, downsizing, packing, unpacking, hanging pictures – whatever needs to be done. Every single move is customized. I’ve helped people move over 750 times, and every move has been different.

We take a team approach to every move. My staff members and I lead teams that include those who are moving and their adult children, ​​movers, consignment ventures, trash haulers. We all carry out various jobs and we all play our parts.

How was Here to Home established?

I founded Here to Home in 2008 in Philadelphia after moving my parents from a large house to a small house.

For my parents’ move, I put together a detailed plan and it was implemented quickly and efficiently. Once I made the floor plan with them, they understood what they could take along with them in the move, as well as what needed to be sold or passed along. Afterwards, my mother said it was the easiest move they’d ever made, they saved money, and she suggested I start a business doing this.

What is your relationship to Searstone?

We’re a small business so we’re not staff members of Searstone, but we have been a part of the extended team since opening in 2013. In what’s called Searstone Moves, our company is referred to incoming residents. We work very closely with Searstone employees and new residents to provide peace of mind for their move. We love being a part of the Searstone team.

What are some of the initial steps you recommend for seniors when they’re planning to move?

We start working with them when they’ve decided they want to live in Searstone. The first thing we do is look at the floorplan of their new home. We carefully consider the closets, kitchen, bedrooms – everything. From there, we create a new floorplan with their belongings based on the space allowed. This lets us see what fits and what doesn’t.

One of our mantras is, We honor what home means to you. Everyone’s home is different. We don’t judge. We say, “if this is what makes you happy, and it fits, then take it with you.”

What key points should retirees know when considering downsizing?

Downsizing is inevitable. Typically, retirees are cutting their living space in half, so they can’t take everything with them. We tell folks to embrace it! This is an opportunity. I named our business Here to Home because we will start “here,” meaning wherever you are in the process, and our job is to create the “home” part. So focus on what you’re keeping, then let the rest go.

We have resources for letting those things go, from sales, donations, and shipping items to family and friends. The logistics behind selling or donating items can be confusing, but we’re here to handle all of it.

We also encourage people to look at it this way – it’s not ‘downsizing’ it’s ‘right sizing.’ For instance, when you got married and had your own apartment or home, that was the right size for the two of you. Then as you got older, had children and expanded to a larger home, that was the right size for your family. As your children move into their own homes, your space naturally calls you to ‘right size’ to something smaller.

What are the pros and cons of downsizing?

You pay less for moving! When moving long distances, you are charged by the pound so the less you bring, the less you pay. Moving locally you pay by the hour, it will take movers less time to move less stuff.

You get to be generous with downsizing and give the things you don’t need anymore to people who can use them and enjoy them. For example, one woman had so many Christmas ornaments, she gave each of her 10 grandchildren a box with 6 ornaments as one of their gifts that year. They will be able to enjoy them for years to come and also think of her whenever they see that ornament on their tree.

The cons show up when people have expectations, such as thinking they will get a lot of money for old furniture. We encourage them to be realistic with these expectations.

What are retirees most surprised to learn about when starting this process?

They’re always surprised at how easy it is. No one wants to do it, they’re afraid of moving. And that is where another one of our mantras comes in: we’re not afraid of your stuff. “Your stuff” being that closet full of your belongings, but also the emotional burdens that weigh on you. The emotions of the move can be heavy, people are sometimes moving from a home they’ve been in their whole lives. These homes hold intense sentimental value. And we’re not afraid of being with the ‘stuff’ of grief.

All in all, working together to downsize and let go of things ends up being an easier process than they expect.

What is the biggest takeaway for those preparing for a move?

“Pan for gold.” When you move, pan for the gold and only bring the gold. Bring the things that spark joy, like Marie Kondo says, and leave the “coulda shoulda woulda” behind, such as ongoing projects, items you planned on doing something with but never got around to, that kind of thing.

If seniors only remember one piece of advice from you, what do you hope that is?

The Highview — an expansion of Searstone coming in 2024 — still has several residences available for consideration. To check them out, visit searstone.com. We’ve got partners like Jennie ready to help you make the process enjoyable!